Ever since I started building frames, I had dreamt about building my Dad a frame. I just never thought he would go for it. You see, he is 72 and retired. He rode his bike to work, rain, shine, snow, rain, freezing temperatures for the last several years he was working.

He has an aluminum Trek road bike with 25c tires and an aluminum fork! It’s horrifically stiff and he still rides it to lunch with his old co-workers almost daily.

So, last year I had him ride my Cyclocross bike and he seemed to enjoy the ride. He was looking into a Salsa something-or-other when I offered to build him a frame. He was excited and so was I!!!

Since he lives in Albany, NY and we’re in Minneapolis, my Mom measured him up and sent me his numbers. Comfort was his #1 request so I RattleCAD’d him up something with a comfortable/upright position and a sloping top tube. Disc brakes was his #2 request followed by a 1x drivetrain with a clutched derailleur. Smart guy hu?

My #1 goal was to fillet braze as much of this frame as I could! Which meant, everything but the bottom bracket. That I used Nova’s Double Oversized Long Shin lugged shell.

My #2 goal was to clear 650bx47 WTB Byway’s aka: S-Bent stays. Testing the limits of the chainstay sockets on the bottom bracket shell.

I ordered up some Columbus Zona main tubes and chainstays for their toughness and Spirit seatstays for their ride quality from Framebuilders Supply. I really like their service! They get me stuff quicker than anybody else and I had a chance to ride with Mike Cobb (co-owner) at NAHBS 2016. Cool cat. 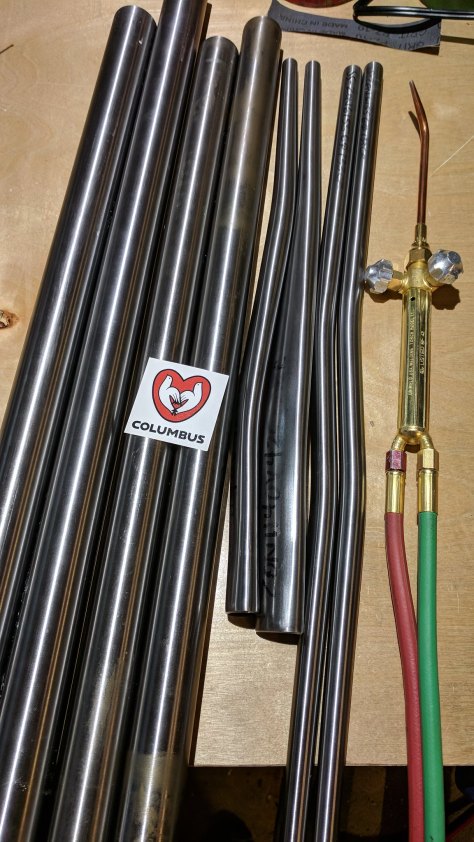 I love internal cable routing. Unless it’s a track bike that you may take on the street and you may wanna switch from brakes to no brakes, I see no reason to NOT go internal. I just love the look too! Here I use 5/16 x .031 wall stainless tubes bent with a brake line bender make the cable routing.

This is also the first time I’m building a frame with my own alignment surface as I got a KILLER deal on a 24×36 surface plate!

With the front tri mitered up it’s time for the big moment! I tacked them all up, checked alignment, tinned them all, checked alignment and laid down the fillets. It’s great how fast it went compared how I used to build with lugs and no frame fixture!

I felt the drive side of these Paragon Flat Mount dropouts needed an extra window like the Paragon Low Mount dropouts I used on my personal CX build. Of course the brake side stays solid to withstand the braking forces. 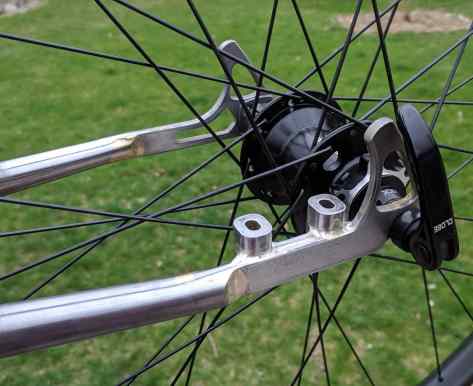 Chainstays and dropouts became one. 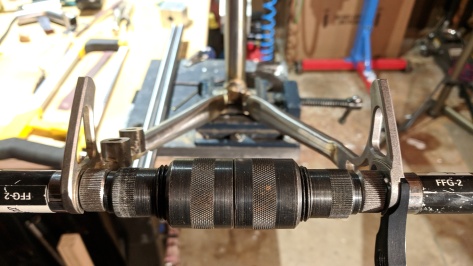 Next was the chainstays to BB shell. I am VERY happy to say that this was the alignment right off of my frame fixture! Not dead ass on but not shabby at all in my opinion. My goal is to build with thru axles soon so I’m really happy with this!

The S-Bend seatstays were SO cool to work with and I was SO happy with how they came out.

I stuck a straight seatstay bridge in there and just thought that with the curves of the stays, the bridge needed some form of curve to it as well. 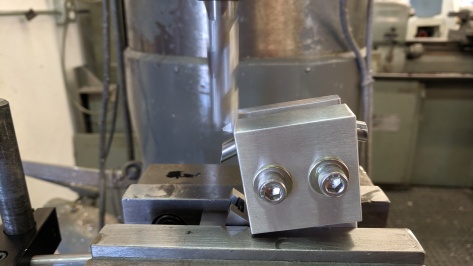 Bridge mitering has always been a BITCH to me. I’ve printed out paper miter patterns and tried to free hand it with grinder and files… never really having an efficient way to get them done. Then Joe Roggenbuck suggested a little fixture like the one above. I got the angled V block and set a stop in the Bridgeport. The fixture holds a 3/8″ tube in on center so you can cut, flip and cut without moving the machine. Brilliant idea Joe!

Myth Cycles on Instagram posted a similar fixture to what Joe suggested only the bottom block has pins that locate the fixture in the while keeping the center line and a bolt to lock it down. This ought to make bridges completely pain free. The only limitation to this design is that it only works with one diameter tube. I made this one to work with 3/8″ (10mm).

Actually, I made 2 of these because I have a new friend in the framebuilding world who was having the same struggles. You see, at work we had an interesting resume come across our desks. Ben Oliver is a diversely talented guy, welder/pro team bike mechanic/machinist who was looking to gain more CNC Machining experience. He also is the lead framebuilder at Stoemper! Since Ben was similarly annoyed with SS bridges, I just made 2 side by side. He sent me a pic of him using his to miter a brake bridge. Since a brake bridge isn’t 3/8″ wide he just shimmed up the opposite side to maintain the center line.

Time for the headtube badge! I wanted this one to be a little taller than other ones I’ve made because the headtube on this bike is 210mm long. Ha! 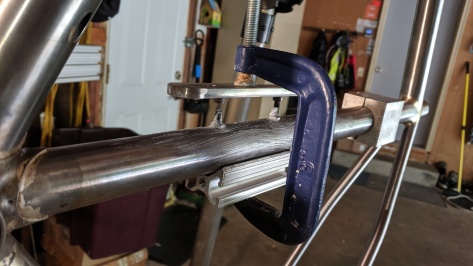 Forgot to braze in the bottle bosses before doing the rest of the front triangle. Oops. No problem. I was basically done at this point. Great timing because my parents were going to be in town on Father’s Day. The bike wasn’t built but the frame was done!

I slapped a few things on the bike to give my Dad a larger picture of the end result, he was speachless! Words couldn’t describe how satisfying it was to see him SO happy and excited with his frame! But he wouldn’t get to ride it for 2 more weeks as my Mom and him were taking our son on a 2 week trip to South Dakota. 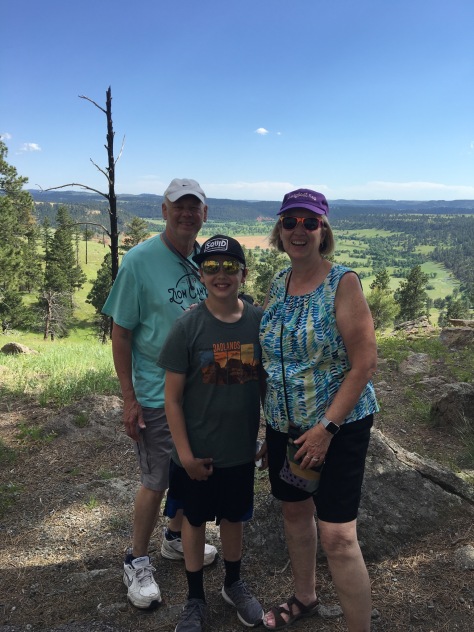 As I was building it I was SO happy with how the brake cable routing came out I had to take a pic! 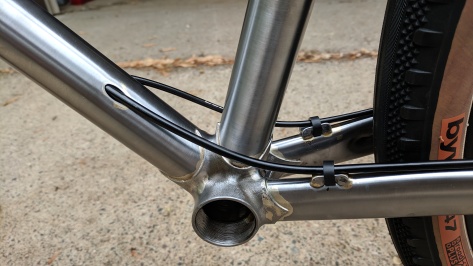 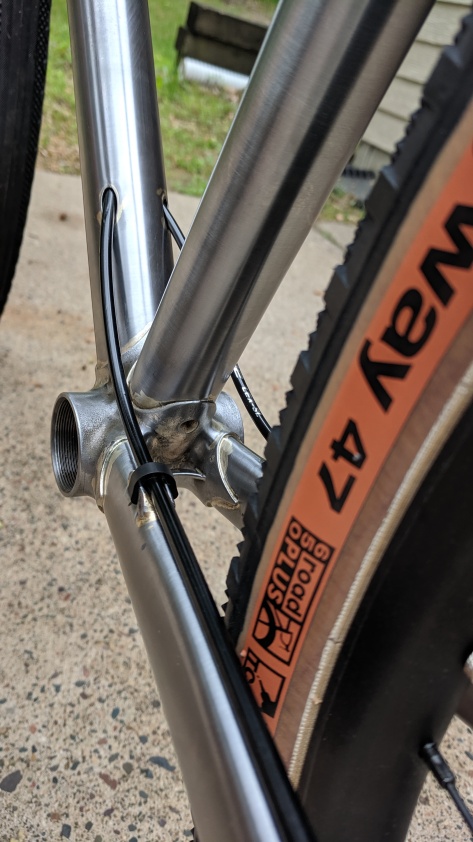 All done! I took it out for a little ride and was thrilled with how comfortable of a ride it was! These tires are amazing! At 30 psi front and 35 rear they were smooth and seemed have a lot of grip in corners. Kinda felt like they could go 5 psi lower each. The bike is very comfortable to cruze on at just about any pace. Sprinting felt funny but with a stack height that high I wasn’t surprised. 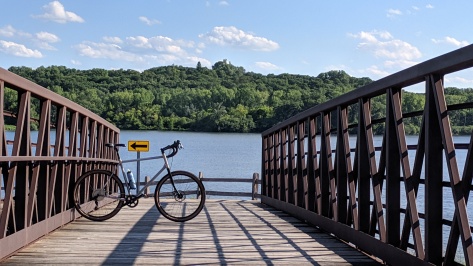 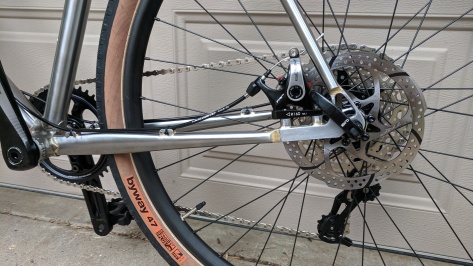 Fast forward to next Friday, time for his first ride!!!! I don’t know who was more excited for this moment!

I had him hop on to show him how to use the SRAM shifter and his ear to ear smile was all I needed to see!

We tossed the bikes on my rack and went to Highland Park. It has a great network of paved trails and some beautiful scenery. 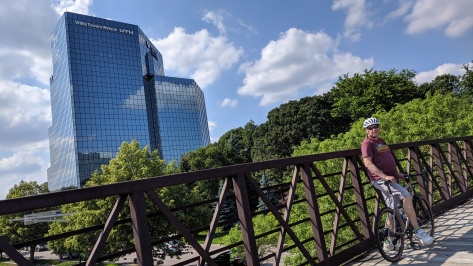 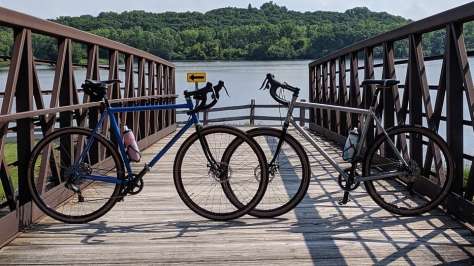 He did 13 miles on it and loved every second of the ride! Amazed at how the big tires and steel frame/fork absorbed the road noise and bumps compared to that older Trek. He loved the simplicity of the 1x shifting and really appreciated the 11-42 tooth cassette on the hills.

Such a bucket list item for me checked off today! ✓

Beyond having my Dad be super happy with the bike, simply being able to share a ride with him was so special to me. It’s something we haven’t really done since I was younger. He was always there when I was racing BMX, shooting video or taking pics of my friends and I, but not on a bike. So it was just so great to be on the same plane, leaning into the same turns, riding through the same puddles, enjoying the same experiences. Like we did when I was MY sons age. Fucking CRAZY how that circle comes together hu?

It has been so awesome building a frame for the guy who built my first bike!

Now, I’m just going to fix the pin holes in my fillets and have it powder coated then Dad’s All Road will be shipped off to Albany for my Dad to enjoy for years to come! I’ll update this post when that all happens!

For now, do something you love and relish in every moment of it!